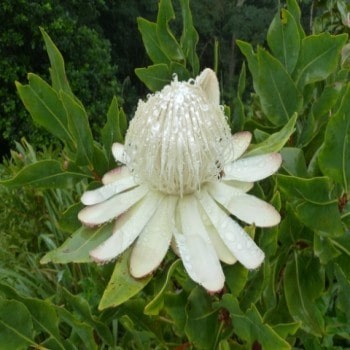 Protea elliottii, often known as tall forest sugarbush, is a flowering shrub belonging to the Protea genus. It is found in Sub-Saharan Africa's highland grasslands.

Daniel Oliver first identified Protea madiensis as a new species in a Linnean Society paper in 1875, based on a specimen brought back from the Speke and Grant expedition to investigate the source of the Nile. James Augustus Grant obtained this specimen in December 1862, while the trees were in full bloom, at a location known as 'Madi,' hence the specific name. Grant writes in his notes that this was the first time he saw it. Botanists thought that four separate Protea species were coexisting in West Africa in the first half of the twentieth century:

P. Argyrophaea, P. Elliottii, P. Madiensis, and P. Occidentalis. P. Argyrophaea was the name given to a tiny, shrubby plant with silvery-white bracts extending from the inflorescence, rather than the pinkish bracts that Hutchinson and Dalziel ascribed to P. Madiensis at the time. The first three taxa were synonymized under the oldest name, P. Madiensis, by John Stanley Beard in 1963.

Diarrhea and dysentery can be treated with stem bark.

Where to Buy Protea Elliottii Online?

If you are looking for protea elliotti, then online stores are best for it. You will get these shrub at low and affordable prices. Release yourself from the tension of going to the market, place your order now and buy Protea elliottii online.

Protea elliotti is a famous shrub and is very useful as it can help to treat diarrhea and dysentery. So, if you ever suffer from these diseases and do not want to take high doses, you know where to go.